Purchase this FMIC directly from us HERE 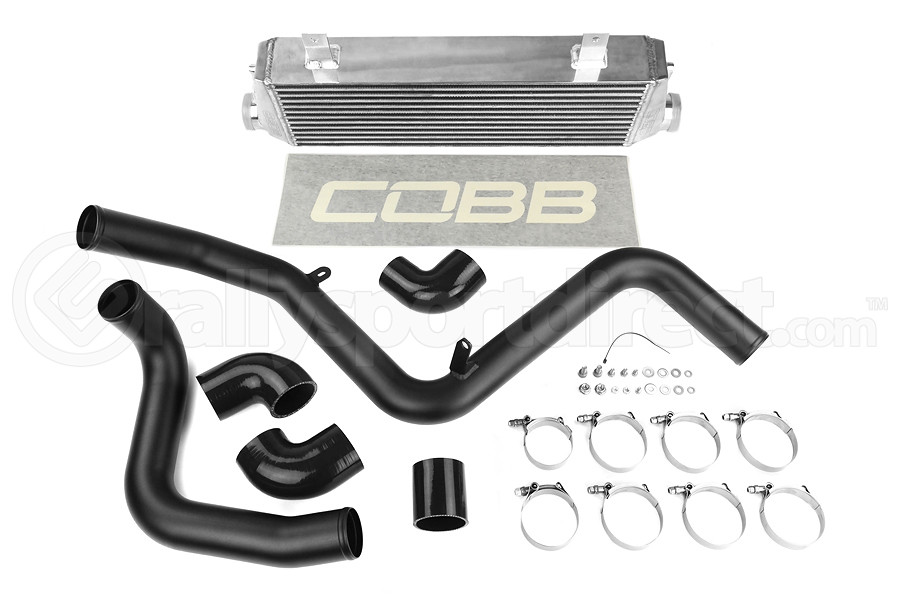 First, a little blurb about the intercooler:

The COBB Front Mount Intercooler (FMIC) for your Focus ST is the easiest way to drastically improve power when coupled with tuning from the Accessport. Even when stock, the factory FMIC can be overwhelmed with heatsoak. By using a 57% larger core with streamlined piping, your Focus ST will come alive with charge air that’s up to 100 DEGREES COOLER. After removing the grill shutters and drilling 2 simple holes, this FMIC requires no other modification for an easy installation with the included custom silicone adapters. Off the shelf maps are available for the Ford Focus ST Accessport so it’s tuned right out of the box!!

And a little technical information:

Now, on to the install! (the fun part)

Let’s collect the tools needed to do this properly:

Now that we have our tools, let’s get to work. First things first, get the car in the air either put it up on a lift, or jackstands.

Next you want to pull the “oh-so-familiar” under-tray off there are a few screws to take off including three that hold the front air deflector/lip on. The three marked with arrows you will have to take off as well to remove the front clip. You can do that now, or later it’s up to you.

Now we will want to move to the fender wells and get the fender liners out so we have room to get to the fender retainer clips. There are seven screws and three clips in the well itself. Also, there are two other screws that are screwed in vertically that help hold them in there as well. The arrow points to the location of the vertical scerws. 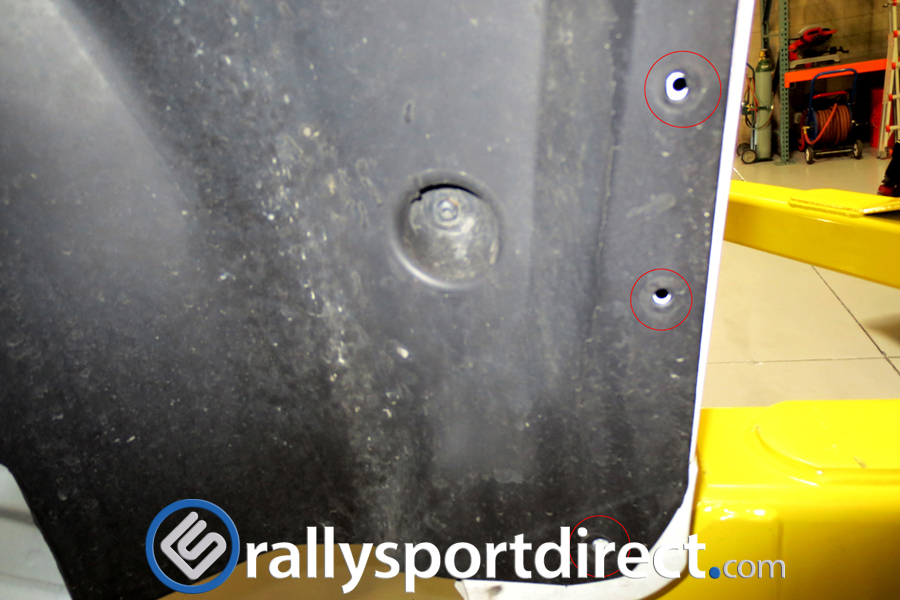 And here’s a shot of the two screws that go in vertically on the front of the fender well. 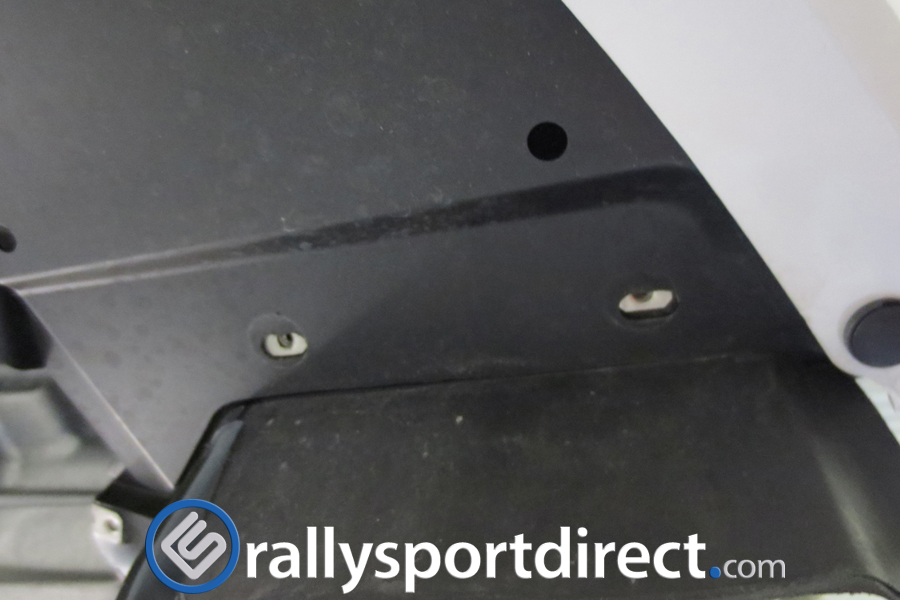 Now the fender well should be ready to be removed, wiggle it around and pull it out then set it aside for now.

Now, you’ll want to pull the fog light clip off the light itself here.

Basically repeat the process on the passenger side. 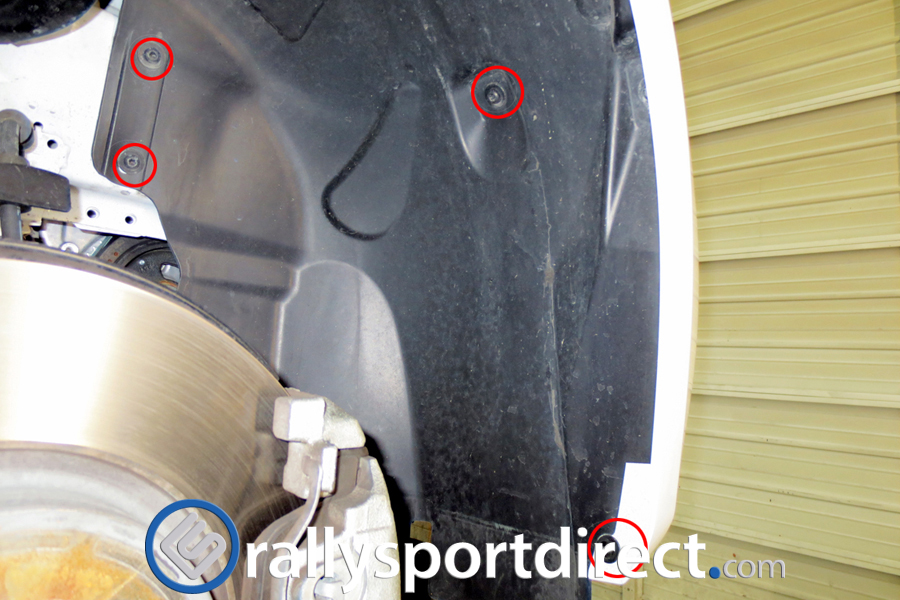 Don’t forget to unclip the plug that powers the headlights. A small flat tip screwdriver will take care of that, just push the clip backwards and it should slide right off.

Now we can move on to the 10mm bolts on the fender retainer clips. You don’t have to remove these, just loosen them enough to pull the fender free from the clip.

Take the hood release handle off, it takes a little patience, but a small screwdriver makes it much easier.

Now the top clips (4), holding the front clip on, can be removed. Just pry the tops up and pull the clips out.

Unplug the foglights and foglight harness. 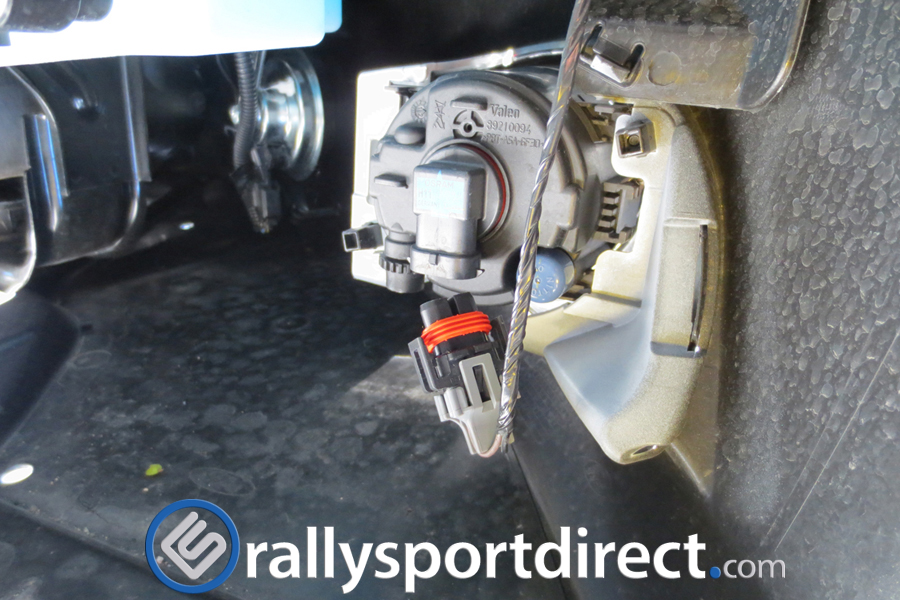 Now we can remove the front clip. There are a couple of big retainers you just have to lightly pry up and you can slide it right off.

Set it aside for now and we’ll get back to it later.

Now there are some shrouds in front of the shutters that we need to get off. The top shroud just pops off. There’s two clips that hold it in place. 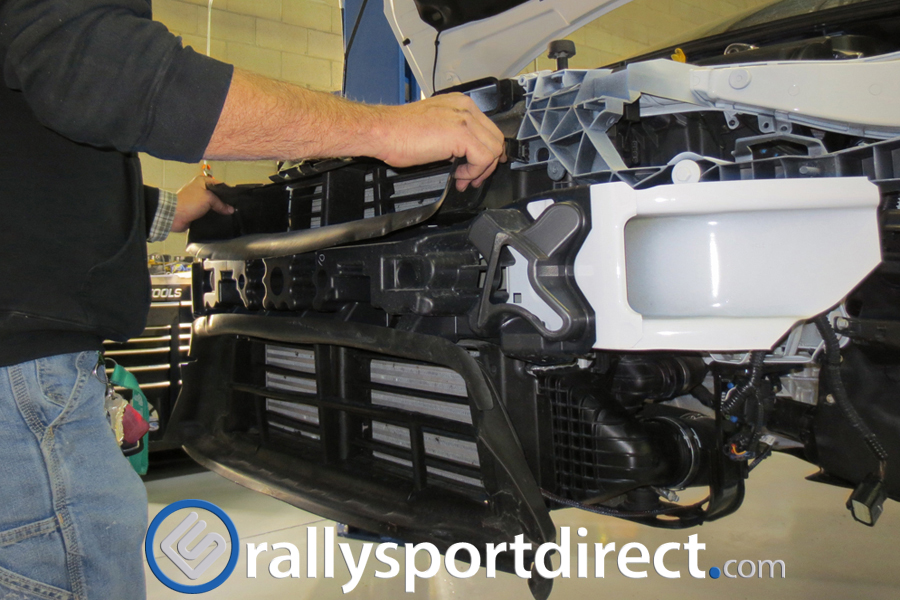 The lower shroud and middle brace are held on by 2 T-30 torx. 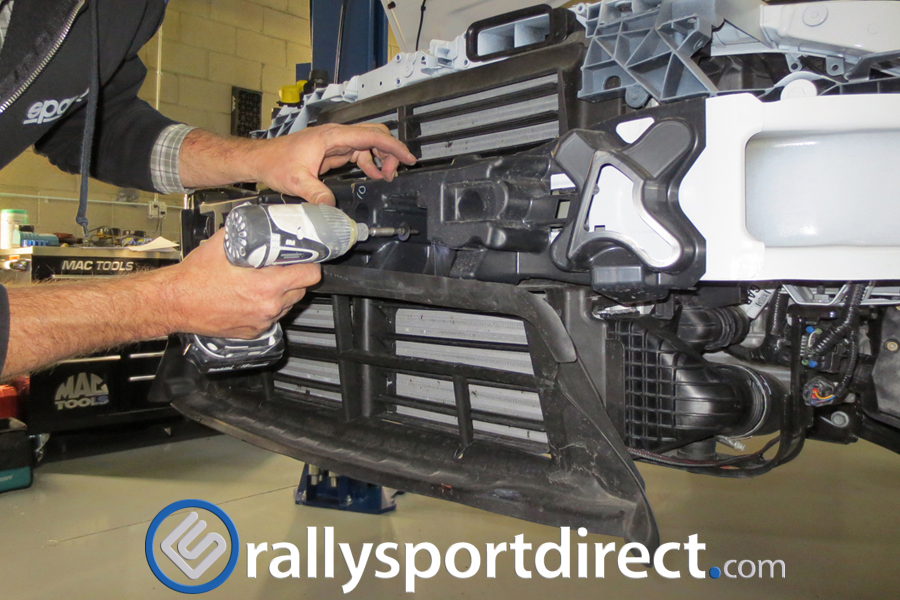 Once loose, the middle support can come off

Then the lower shroud

Now we’ll want to unclip the harness going to the shutter system, it’s on the driver’s side by the intercooler. 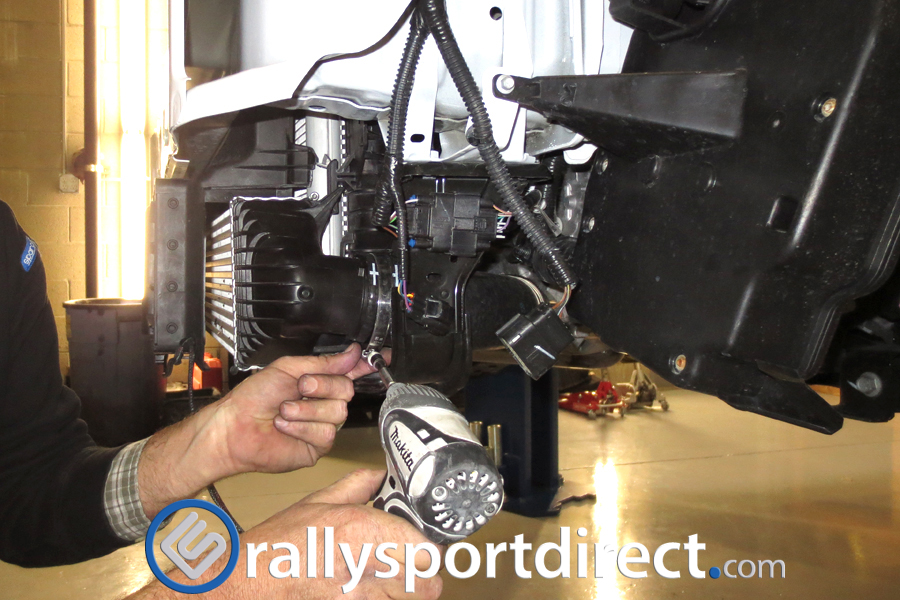 The intercooler should pull right out along with the shutter system.

Here’s a comparison shot of the stock vs COBB FMIC

Make sure you have all your parts that come with the kit by laying them out and comparing it to the documentation.

Since we didn’t have the dimple they mention in the COBB instruction, we placed the intercooler in it destination for lining things up. 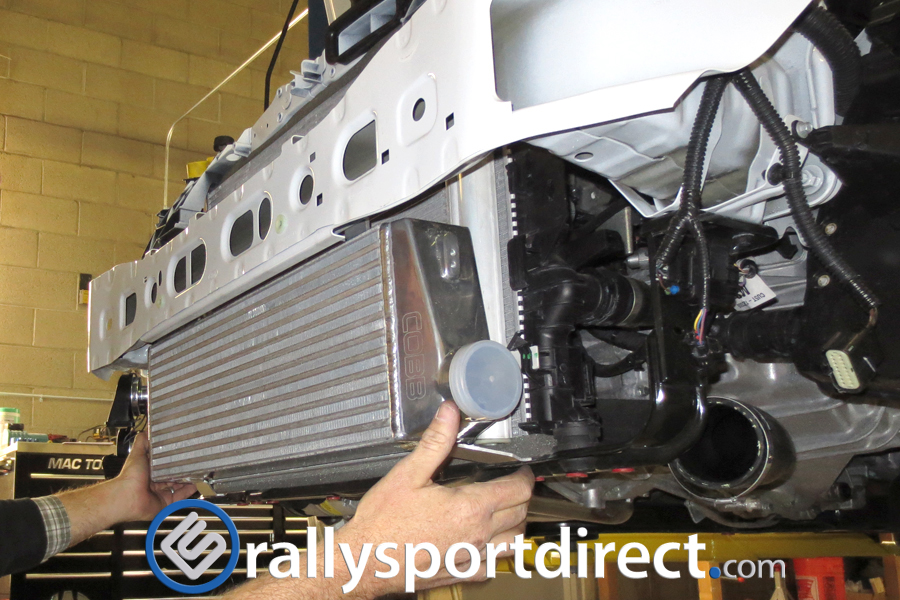 Mark your holes and start the fun part, DRILLING! This will take you a while, but with some patience and persistence you will eventually get through. 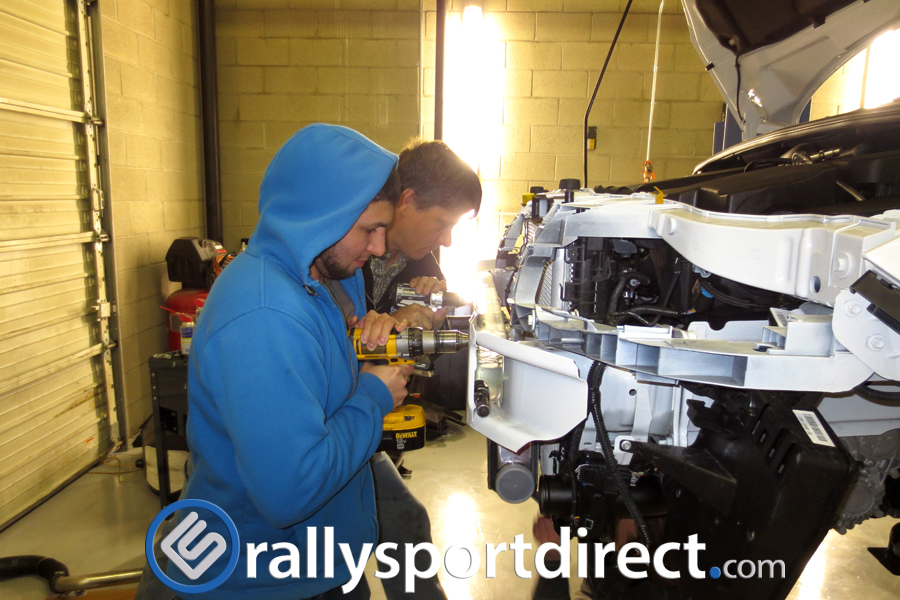 If you have some help, while you’re drilling the holes, you can have someone start plumbing the intercooler piping. 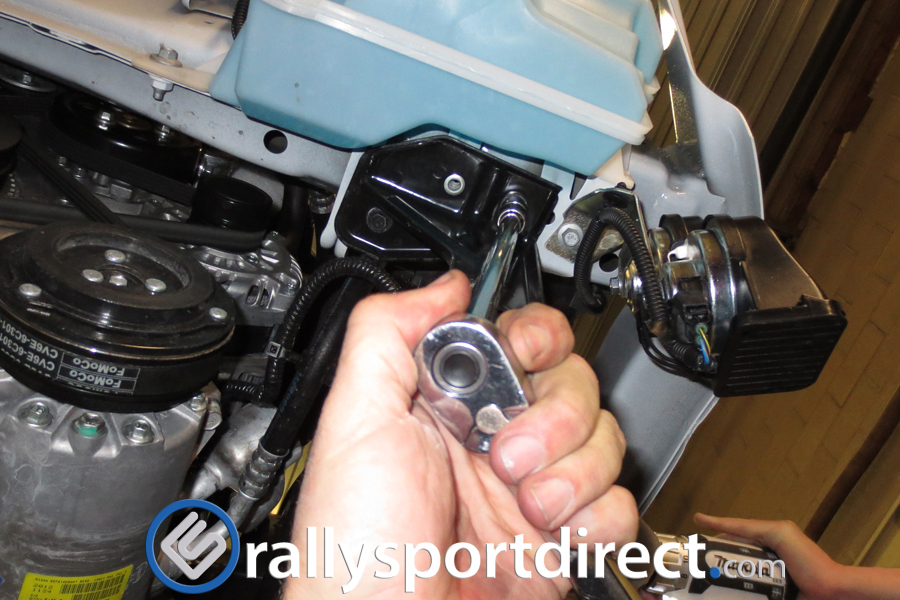 Don’t forget to pull the factory MAP sensor off your stock intercooler and put it on your new COBB intercooler. This takes a T-25 torx to remove and a 4mm allen wrench to install.

Now that you have wasted a good chunk of the install drilling two holes, it’s time to place the intercooler and bolt it in place. 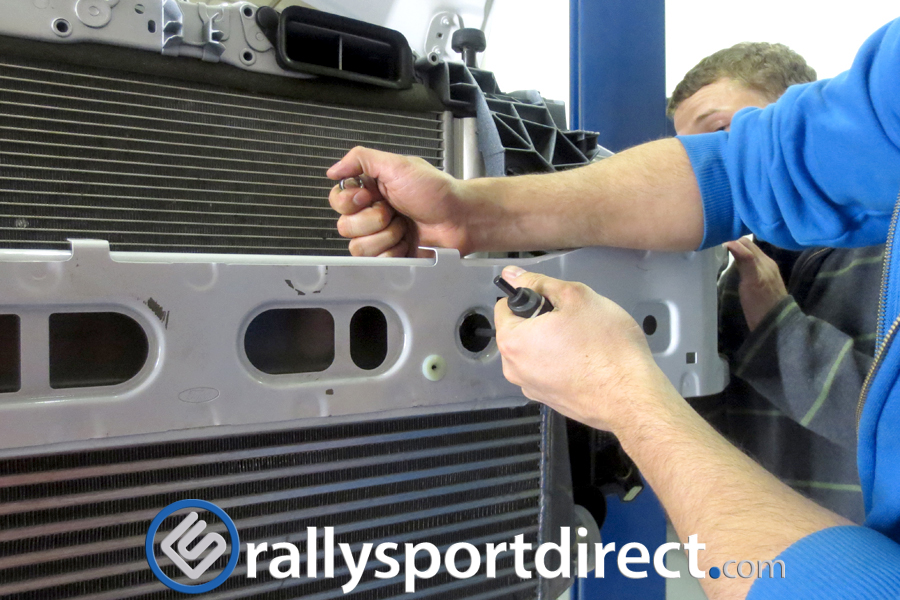 Now we can finish up out intercooler piping install. 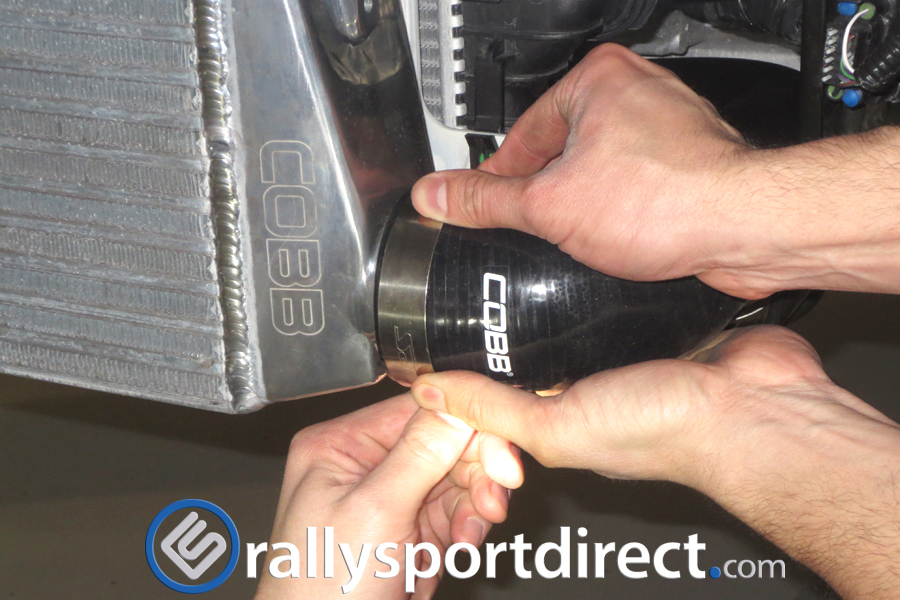 Lets put this thing back together shall we? It has been asked a few times on the forum about the shrouds, we replaced them both, as they are designed to route the incoming air to the appropriate areas. 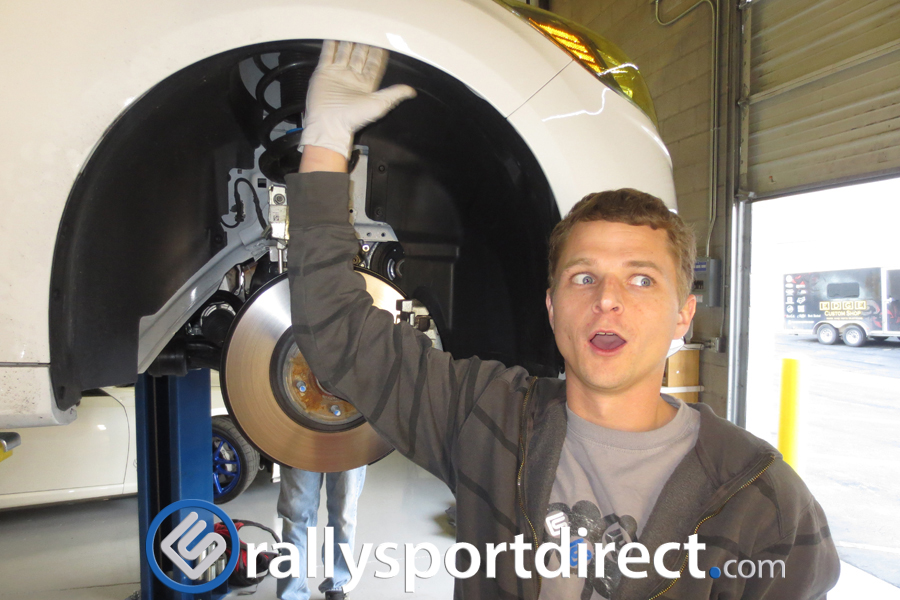 Now all we have to do is button things up, install the COBB stage 2 map and go for a drive!