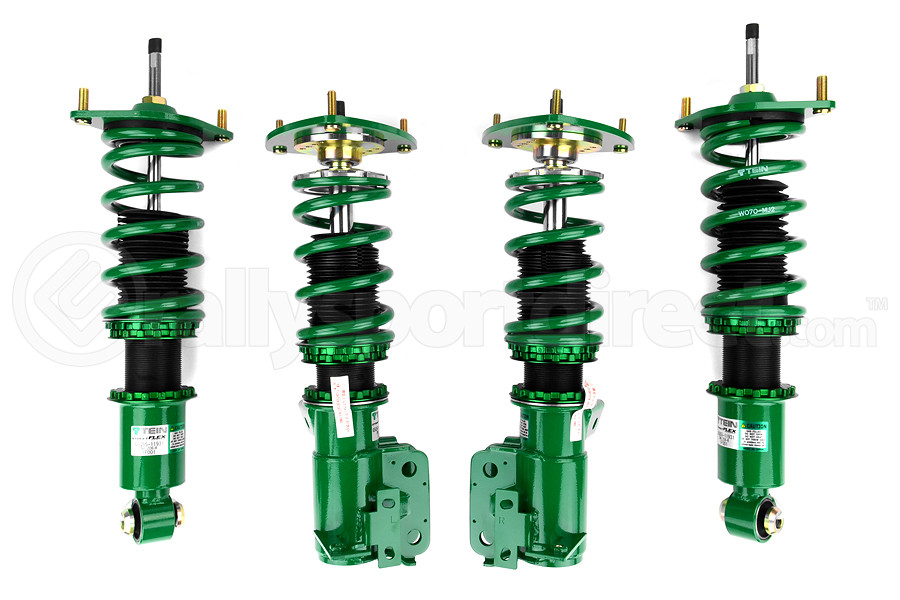 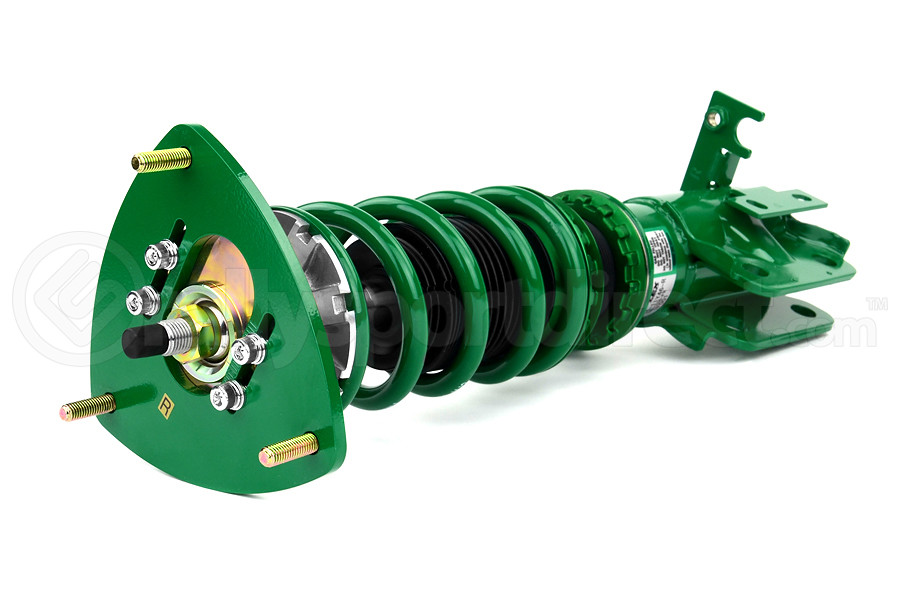 Okay, first I must say I feel bad for being so late to get this review and feedback out on the Tein Street Flex Coilover kit. I know there were a few people requesting it, so I tried to get this written up as soon as possible, and with that said, let’s move on to the review shall we? At this time I did not have a chance to really push this suspension in the way I wanted to due to the cold weather and crazy snow we have been getting here recently, however on my first drive I did note some initial impressions of the suspension in general.

First let’s start with the boring details of the install. From start to finish, we were able to get this done in about 3 hours, and that was with me taking my sweet time and enjoying the peanut gallery’s commentary while I did the install. Fitment was spot on with all of the ABS and Brake line brackets, they were right where they needed to be, which made for an OEM fitment, a huge +1 in my opinion. With the car being so new, all of the bolts came off with no fuss, and the new suspension went on like butter on warm toast. All of the adjustments are easy to get to, including the spring pre-load, height adjustment, front camber adjustment and damping adjustment, I could not be more pleased with this. Now, we did lower the car a bit more than what Tein had set for us right out of the box, but with some careful measuring, this was a breeze, even with the wheels still on the car. I always expect a bit of fuss with just about anything I do with a car, but to have these go on so easily, I almost feared that the car gods would strike me down when I went for a test drive.

Now comes the moment of truth. I double checked all of the bolts and nuts for proper torque, torqued the lug nuts, lowered the car from the jack, put on my big boy pants(which are actually just my clean pants in this case), kissed my Tein Dampachi doll for good luck, and rolled out of the shop. Listening for any odd sounds or clunks as I went lock-to-lock with the steering wheel, and there was nothing but the sound of my tires picking up some small pebbles from the road(more likely tiny chunks of salt and ice) and bouncing them off the fender liners. This is the time when you can finally ease down from being a paranoid, hypersensitive freak, to just sitting back and enjoying the ride, and I am planning on it.

First stop, Nurburgring! Well.. not quite, it was actually the local chevron to fill up the bone dry fuel tank, but close enough right? After some much needed liquid hydrocarbons, I was off for a real road test. I swung onto the freeway to see how the dampers did in a higher speed situation with some pretty decent sized bumps, and I was really surprised to feel just how comfortable these coilovers actually are. Now I am never going to say they ride like stock, as that would be a lie, but if you ever find yourself wanting a more out of the stock suspension, I really think you would be happy with the comfort level on these new Street Flex coilovers. The damping felt like a perfect match for the springs, they absorb small sharp bumps just as well as they absorb the larger smooth bumps, and they were doing everything quietly as well. I made a quick exit off the freeway just so I could jump back on utilizing a long sweeper turn which put me right back on the freeway in the opposite direction. Not trying to push these “summer only” tires too hard in the bitter cold temps, I was being pretty careful around the turn, but still managed to go fast enough to put a smile on my face. I could instantly tell the response from the suspension and feedback from the car was greatly improved, allowing me to feel what the front and the rear end of the car were doing at all times, and this made me a happy boy!

Knowing the direction I was now going on the freeway was taking me directly to some very nasty roads, I thought that this would be a great time to really test the comfort of these coilovers as there was no way I could really give a solid impression of their performance this time of year. The suspension had no problem dealing with pot holes, cracks in the roads, smoother washboard sections, or medium sized bumps. I was very impressed that they were able to handle themselves on these horrible roads, but I knew I was quickly approaching the big one, the mother of all bumps, the one that makes me cringe even in a bone stock car, and I hit it hard. I could feel the suspension struggling to absorb such an impact so quickly, which happily transferred that shock into the chassis of the car, and then directly to my spine. I winced for a split second, perhaps knowing in advance what I was about to put the car and myself through, and then it was over. Ha! That was it? I expected so much worse! Not that I would want to turn around and do it again, but that is about the worst, most worthless, car destroying patch of road I could find for miles around, and the car did fine! I quietly apologized to the little Albino Rhino, and petting its dash panel for what I had just intentionally put it through. I made a promise that I would never put it through that much abuse again unless it was strictly for fun.

The rest of the ride home was quiet and enjoyable as I was able to just sit back and relax and reflect on how far we have come with this car. One thing that has never changed is the looks that this car gets. I counted no less than 7 “thumbs ups” on my short test drive, and countless necks turning into rubber, with my favorite being the small boys who stare in amazement at this tiny little car with blue wheels bopping down the road. If for nothing more than my own amusement, this car would still be an amazing ride just so other people can enjoy it. Needless to say I am still enjoying this car very much and really look forward to where we are taking the Albino Rhino in 2013, I truly think you guys will love it!